The center of origin/center of diversity for tomato is the Andean region of South America (Equador, Peru, Chile, Bolivia and Columbia).  Based on the tracking of the major genes associated with domestication (e.g. fruit size, fruit coloration, and stigma insertion) it is believed that domestication of the tomato started in South America, moved to Mexico, and then continued again in Europe after being imported from the New World in the 16thcentury.  We know that the path to domestication, much of it far from the center of origin, led to a significant narrowing of the tomato germplasm base.  Dr. Charles Rick, the father of modern tomato breeding, estimates that the cultivated tomato contains <5% of the genetic variation found in its various wild relatives.

Modern genomic tools have been extremely useful in tracking the evolution and domestication of tomato, and have allowed measurements of both intraspecific (within species) and interspecific (between species) genetic diversity in tomato and wild relatives.  The results reveal an interesting puzzle – Solanum lycopersicum (cultivated tomato) has very little intraspecific genetic diversity compared to wild relatives, yet has substantial and obvious phenotypic diversity in fruit size, shape and color – all developed as part of, or post-domestication. The wild relatives have evolved for centuries in multiple micro-climates in the northern Andes and contain enormous genetic diversity, especially for traits related to tolerance to biotic and abioitic stresses, but have little phenotypic diversity for fruit size (small), shape (round) or color (green, with the exception of red color of S. pimpinellifolium and the orange color of the species native to the Galapagos).
Genetic variation in tomato wild relatives.

There are 12 wild relatives of cultivated tomato (Solanum lycopersicum), ten of these are endemic to western South America from Ecuador to northern Bolivia and Chile, and two found only in the Galapagos Islands (see map below).  These species, and associated sub-species, have evolved specific adaption to numerous micro-environments within the geographic area shown on the map.  This includes desert-like high elevation environments, as well as wet sub-tropical coastal environments.  As noted above, these related species are all small fruited and most, unlike cultivated tomato, are cross- pollinated.  Solanum cheesmaniae, S. chilense,  S. habrochaites, S. pennellii, S. peruvianum and S. pimpinellifoliumhave been the most widely used wild relatives in tomato breeding.  All six of these related species are cross compatible with cultivated tomato, though fertility is much better with some species than others.
The substantial genetic variation within these wild relatives has been a rich source of genes for resistance to various tomato pathogens, and a source of genetic variation for other traits for which such variation is lacking in cultivated tomato. In addition to numerous key disease and nematode resistance traits, which have almost exclusively been introgressed from crosses with wild relatives, the delayed ripening/ESL mutant allele “rin”, the “sp” mutant for determinate growth habit, the genes/alleles controlling length of fruit truss, Aft (anthocyanin fruit), the “j2” mutant for the jointless trait and genes associated with increased soluble solids (brix) and sugar composition are also derived from wild relatives (Bauchet and Causse, 2012). There is ongoing research on mining wild relatives for genes associated with improved water use efficiency, salt tolerance, and production of specific flavor enhancing volatile organic compounds. The Charles Rick Tomato Genetic Resource Center at UC Davis maintains a vast germplasm collection of wild relatives and other diverse genetic stocks for use by tomato scientists and breeders.

The tomato varieties grown in the U.S. trace primarily to the large fruited types developed in Europe over the last 300 years, and brought to America by early settlers.  Family favorites benefitting from additional selection in America for taste and adaptation, and countless generations of seed saving, are today’s heirlooms.  It is generally believed that the strong selection for large fruit in the domestication of tomatoes, selection which happened a great distance from tomato progenitors and relatives, resulted in a significant narrowing of the germplasm base in cultivated types. (Estabrook, 2015).  In reference to the relatively narrow genetic variability in tomato and the great diversity in fruit size, shape and color, Steven Tanksley, a leader in tomato molecular genetics, says “The irony of all this is all that diversity of heirlooms can be accounted for by a handful of genes. There are probably no more than 10 mutant genes that create the diversity of heirlooms you see” (Borrell 2009). The image below (Tanksley 2004) shows the diversity in size and shape due to just four genes: LC (locule #) OVATE, FAS (faciated) and SUN. 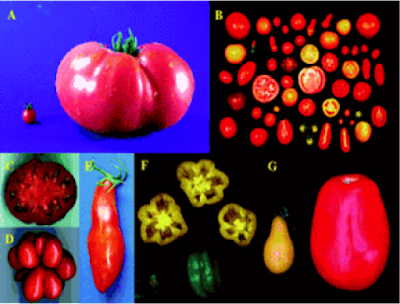 The exciting variation in fruit color that we see today in tomatoes is due to mutant alleles for a few key genes/enzymes in the biochemical pathway that produces lycopene, and related carotenoid pigments (reference).

A relatively recent paper on genetic variability in tomato was published by Sim, et. al. (2012), They report genotypic information on a broad array of tomato germplasm using a high density SNP (marker) array.  This allowed them to measure differences between and within various germplasm types. Four of the seven genetic sub-groups they identified were: modern processing hybrids/lines, modern large fruited fresh market hybrids/lines, modern cherry hybrids/lines and heirloom types. They demonstrated that modern breeding had created significant genetic differences between these sub-groups, and that genetic variation within the sub-groups was similar, except for heirloom types which had less genetic variation.

Thoughts on use of available genetic variability in breeding

Breeders today have a rich genetic toolbox for designing O.P varieties or hybrids that vary greatly in fruit size/shape, fruit color/striping, earliness, plant stature/growth habit, and resistance to >15 key tomato diseases and nematodes.  This genetic toolbox is a combination of traits/alleles developed within S. lycopersicum during and after domestication and genes introgressed into cultivated tomato from wild relatives. Many of these interesting traits have been linked to molecular markers, making MAS (marker assisted selection) a particularly useful tool in stacking multiple desirable traits.  Genetic diversity studies, such as the one described above, also clearly show significant divergence between fresh market and processing types.  Crosses between these market types have shown interesting trait combinations.  The lines below demonstrate some of the phenotypic variability available to breeders today (FLF photos). 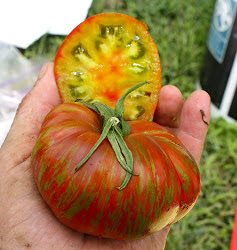 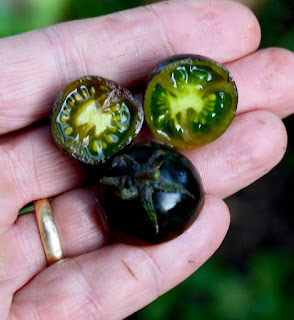 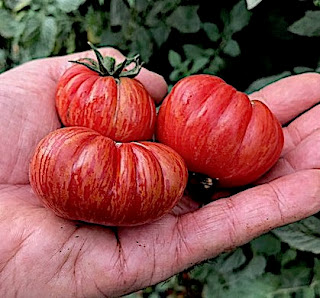 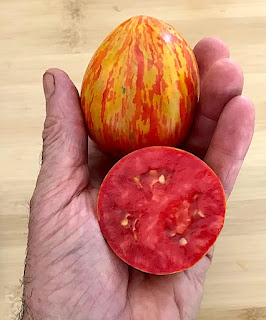 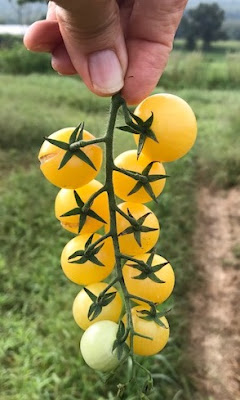 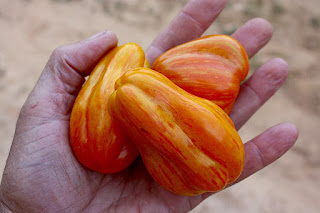 As new challenges and opportunities arise, such as new pathogens or novel races of existing pathogens, adaptation to changing climatic conditions, and the development of new tools for improving fruit flavor – it is likely that tomato scientists will again rely on wild relatives as a necessary source of genetic variability.  Thankfully there is a very vibrant international public research scientific community doing the “heavy lifting” behind the scenes to identify these opportunities.  The heavy lifting includes not just finding a source for the desired genes, but also developing appropriate molecular markers tightly linked to the gene and “pre-breeding” - backcrossing the new trait into cultivated lines to generated NILs (near isogenic lines) which contain the desired gene with minimal effects of linked genes having an undesirable negative impact on one or more other traits.

Most tomato enthusiasts are unaware of the significant contributions to tomato made by germplasm from wild relatives and of our reliance on such novel genetic variation for future breeding progress. Kudos and thanks for the C.M. Rick Tomato Genetic Resource Center, the World Veg Center, other such international centers, and the global public tomato research community for their outstanding work.