My friend Blane, in Alabama, has a tomato season that starts a few months ahead of us - so he gets a first look at the various breeding lines he's helping to evaluate.  Here are a couple of photos of fruit in the F4 generation of Siberian Tiger (from our cross OSU Blue x Beauty King).  Not only is Blane a skilled grower and keen observer - he's lucky, often finding just the segregating variant we are looking for.  Thanks Blane!  Photos by Blane Horton.

August 2013 update - unfortunately neither Blane nor I could stabilize the striking F4 phenotype (on the left).  I had shared seed of the original "tiger striped" F2 with a handful of people and one or more of the early generation lines was commercialized under the name Siberian Tiger.  These show variable phenotypes, none of which appear to capture my original product concept - so it goes.  Some good news however ... 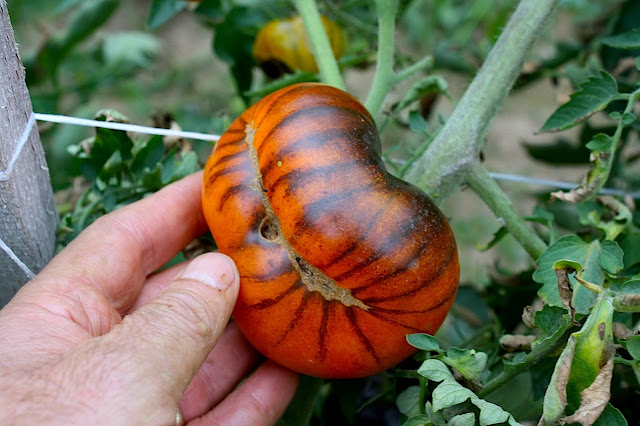 This is a F6 segregate from my original breeding cross, found this summer in our Pennsylvania nursery.  To avoid any confusion the working name for this line is Bengal Tiger, more on stability next year.
Posted by Frogsleap Farm at 5:31 AM 2 comments:

What prompted this post was my finding of a pair of zebra mussel encrusted sunglasses on the beach of our local lake last week.  Zebra mussels are a recently introduced invasive species that, despite best efforts, are proliferating in many local Minnesota lakes.   They are hyper competitive and in a short period of time have become a dominant species in the lake.  Bad Zebra.

For tomato lovers the tomato variety Green Zebra is something many of us now take for granted.  It was developed by Tom Wagner over 30 years ago and released in 1983.  It sometimes called an heirloom, and Tom is often not given credit for the breeding.  He combined the green stripe gene (gs) and an interesting tasting green when ripe (GWR) background through a series of crosses over many years of breeding.  Green Zebra was a founder source for Brad Gates and other breeders that have combined stripes and great taste as a way to introduce novel looking and tasty tomatoes.  On Tom’s New World Seeds website you can now buy seed of his reselected Green Zebra - we planted it this year.  Good Zebra.

Posted by Frogsleap Farm at 7:37 PM No comments: 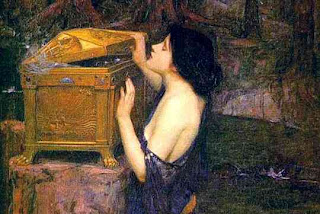 We used to think there were pretty predictable combinations of skin/flesh color in tomatoes, and that with a few exceptions the epidermis color (yellow vs clear) was simply a subtle tinting of the window through which one viewed flesh color.  Over the last couple of years, and this year especially, we’ve found a number of surprises when we sliced into a new variety or breeding line.  When you open Pandora’s Box – be prepared for something unexpected …. and delightful. 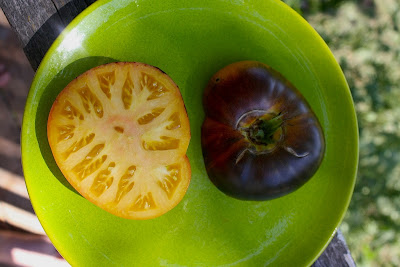 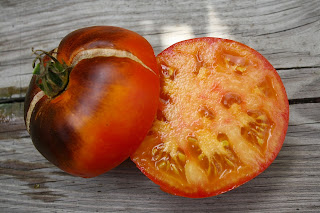 An obvious exception to the conventional skin color/flesh color rules are the new tomato lines with anthocyanin accumulation in the fruit - Aft (see the blog on this site “Breeding the Blue Tomato).  In the presence of light the anthocyanin pigment accumulates in and just below the fruit epidermis.  This trait has now been introgressed into a number of genetic backgrounds with red, pink, purple, brown, and bicolor fleshed types.  I haven’t seen an Aft GWR fruit yet, but that doesn’t mean it doesn’t exist, or that it won’t pop out in someone’s breeding line in 2012.  It’s on our priority list.  Thanks again to Professor Jim Meyers and his grad students at OSU for developing the background Aft/atv germplasm.  They have just released a new Aft variety “Indigo Rose” that you might want to check out, it’s available from several seed sellers. 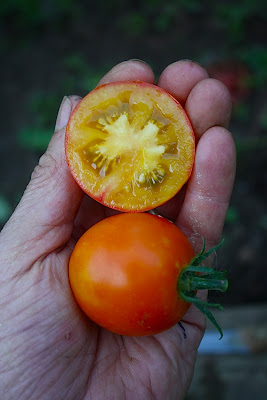 There are other examples of the accumulation of a contrasting pigment just beneath the epidermis.  In a large fruited cherry line now breeding true for this trait (suggesting it is likely recessive), there is a thin layer of bright red pigmentation just beneath the yellow epidermis.  The result is a dark orange fruit that when sliced shows the red layer overlying yellow flesh.  It’s an interesting look in a very tasty line now with multiple F4 sisters, with and without the green stripe (gs) trait.
This phenomenon is even more striking on a new F1 plant (from a three way cross) we found this year.  This odd looking tomato has a relatively drab dark yellowish brown appearance on the outside, caused by another underlying layer of pigment which in this case, shields a brilliant light green flesh.  We are anxiously awaiting the F2 generation next year.  The working name for this striped beauty is Pandora’s Box, but there’s a lot of work ahead to stabilize this unique phenotype …. more on this later.

This year we grew Millard Murdoch’s Captain Lucky, a stable line with purple skin and GWR bicolor flesh, and several plants of Bill Jeffer’s segregating F3 “Wild Thyme” which also had interesting combinations of skin color and flesh color (mostly bicolor types).  These were both a little late for this season and this latitude – but even late in the season these both tasted pretty darned good.  We are crossing plants of both to some earlier breeding lines.

We’ve long had a fondness for bicolor/tricolor types, and now have several breeding lines with striking bi/tri color combinations and veins of color (mostly red) sometimes bleeding out to just below the epidermis, and significantly affecting coloration of the fruit surface.  In our lines this tendency is combined with gs and/or fruit stripe (Fs) making the fruit color combinations quite amazing.  Brad Gate’s Berkeley Tie Dye and Beauty Queen were inspirations for this effort, and for our breeding work generally.
My friend Carolyn Male reminded me that the opening of the mythical Pandora’s Box unleashed evil surprises into the world.  In the case of these breeding lines, and this phenomenon generally in tomatoes, we like the “box full of surprises” metaphor, but with the surprises being a source of delight that continues to undermine the red and round, firm but tasteless super-market tomato model, and giving rise to an exciting opportunity for artisan tomato breeders, growers and sellers.  Happy New Year.

A January 15 update:  thanks to the real-time feedback made possible by the web - Julien posts as a comment, a photo of a GWR Aft tomato.  It looks like the photo link ties to Tom Wagner's blogspot, so I am assuming it is a segregent from one of his Aft lines.  I apologize I cannot give proper attribution to the photo. 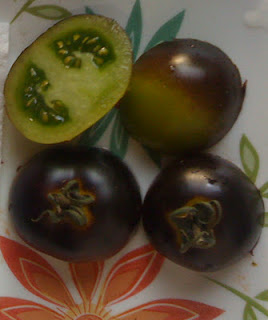