These breeding lines are at various stages in development, but represent those that we voted as best of 2014.  Since these plants were in four different breeding nurseries, MN, NC, PA and CA – there are at least two from each to avoid biasing by growing location.   The fact they were not side-by-side, head-to-head, and were tasted at various times from mid-July to mid-August should preclude a formal ranking – but what the heck.

#1  I planted Everett's Rusty Oxheart tomato a few years ago, and it was too late for our Minnesota season - never ripened.  I was able to use it as a pollen parent in a cross, and wow!  We've got a handful of F4 lines now that are hands down the best/tastiest tomatoes in our breeding nurseries.  I’ve posted two photos that represent the range of about eight lines we are advancing. All have phenomenal flavor and a light to dark ochre skin with some pronounced green in the flesh.  The fruit have heart shaped tendencies.  Good lookers to be sure, but the flavor will make these famous.  I have never been so optimistic about a breeding line. 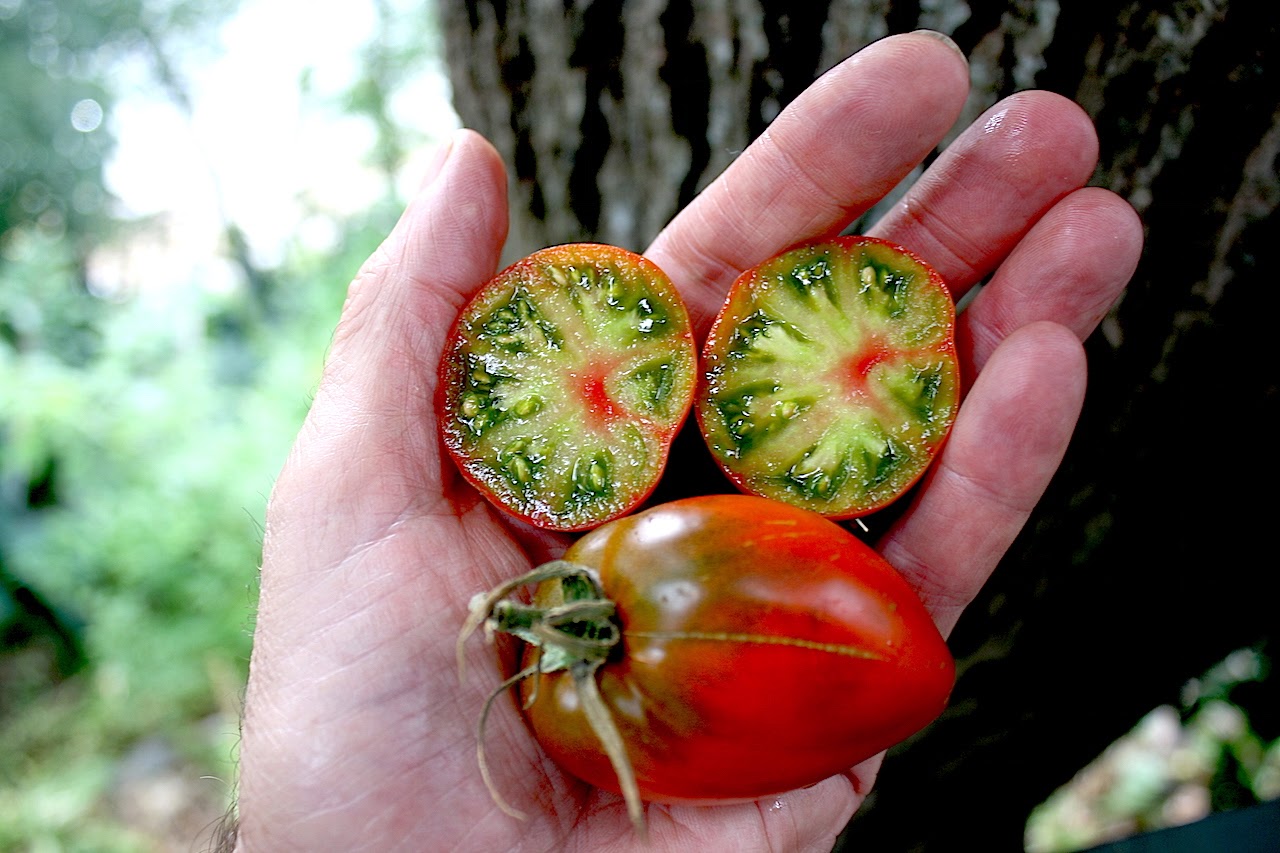 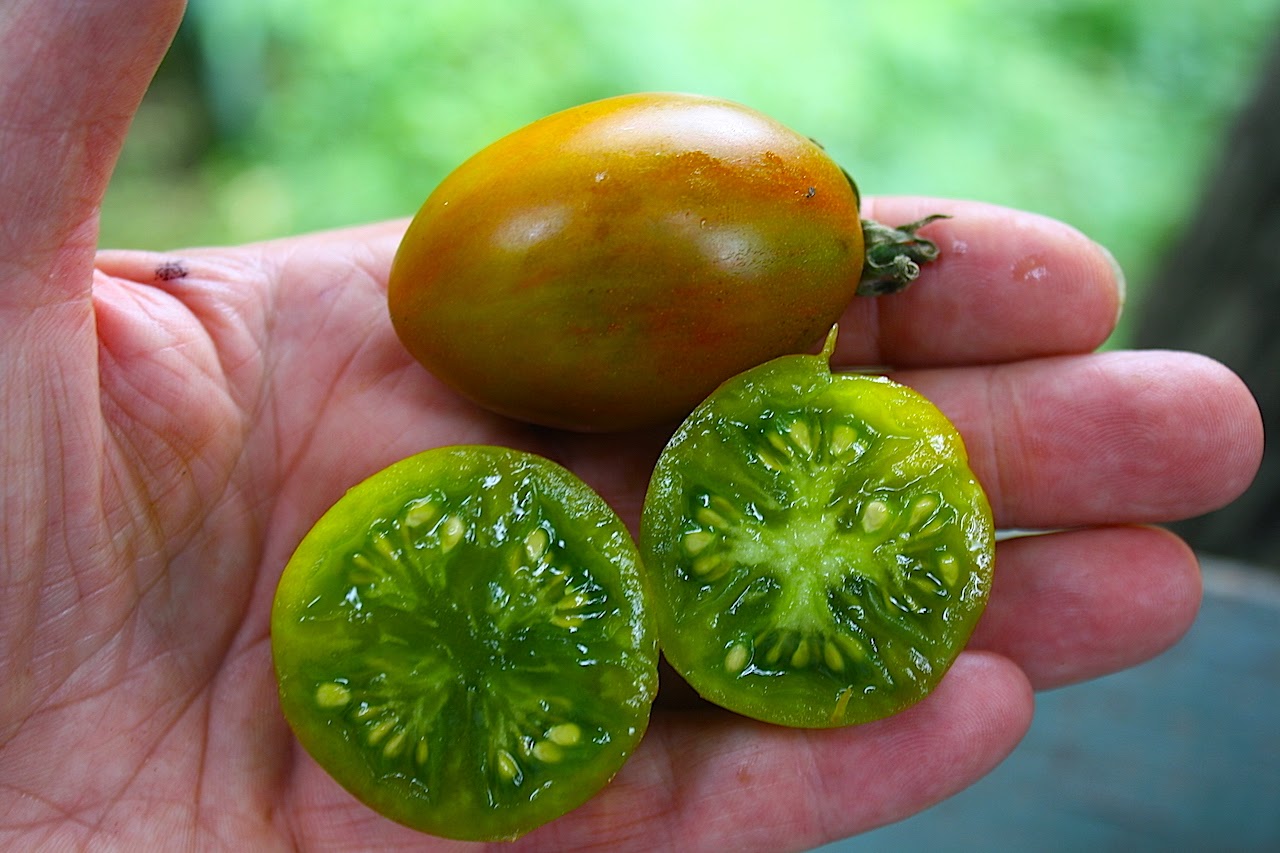 #2  I love the contrast between dark red flesh and the metallic green striped epidermis in this line.  This trait combo is now fixed in the F5 – we are fine tuning now for flavor, fruit shape/size and plant health.  We think this line will be outstanding.  The two photos represent the surprise/thrill in cutting open the fruit.  Someone online said it looks like a watermelon – perhaps. 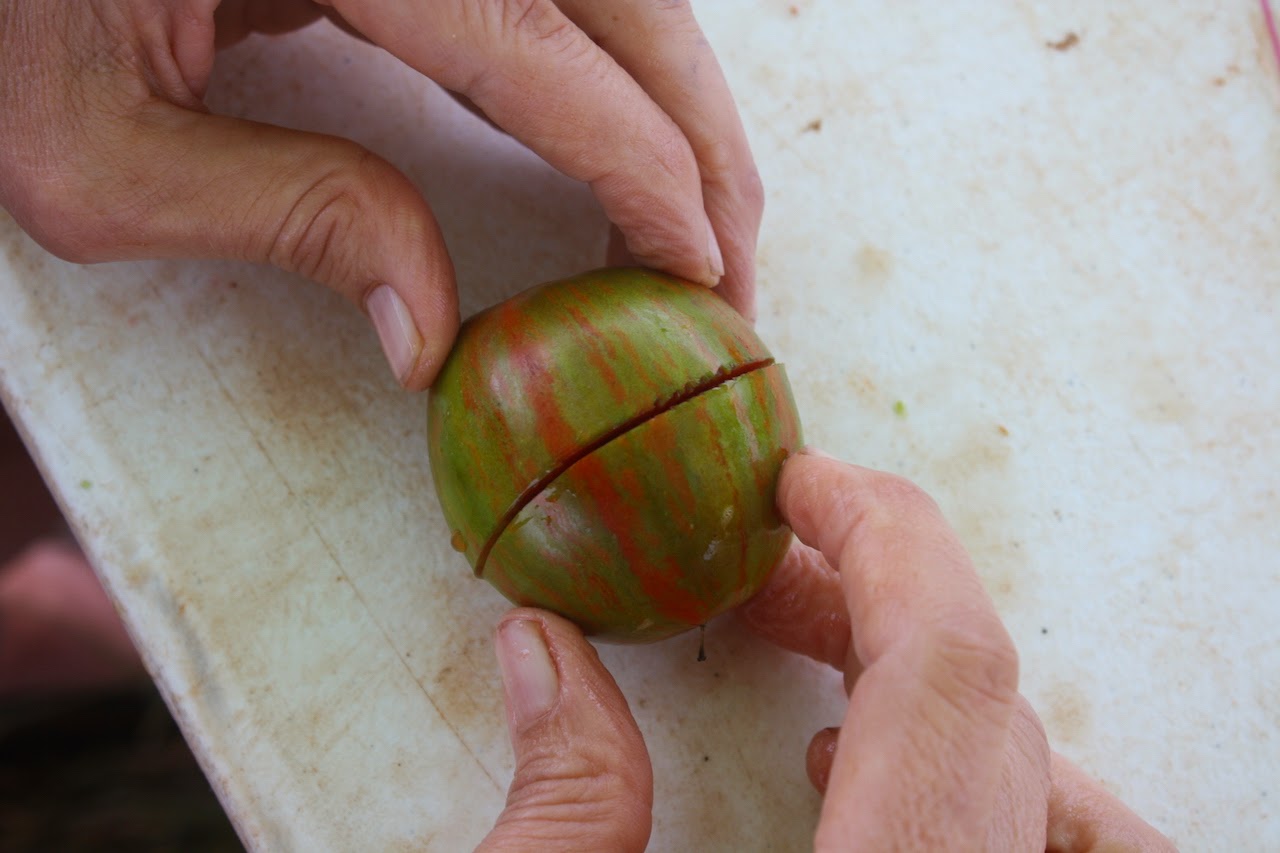 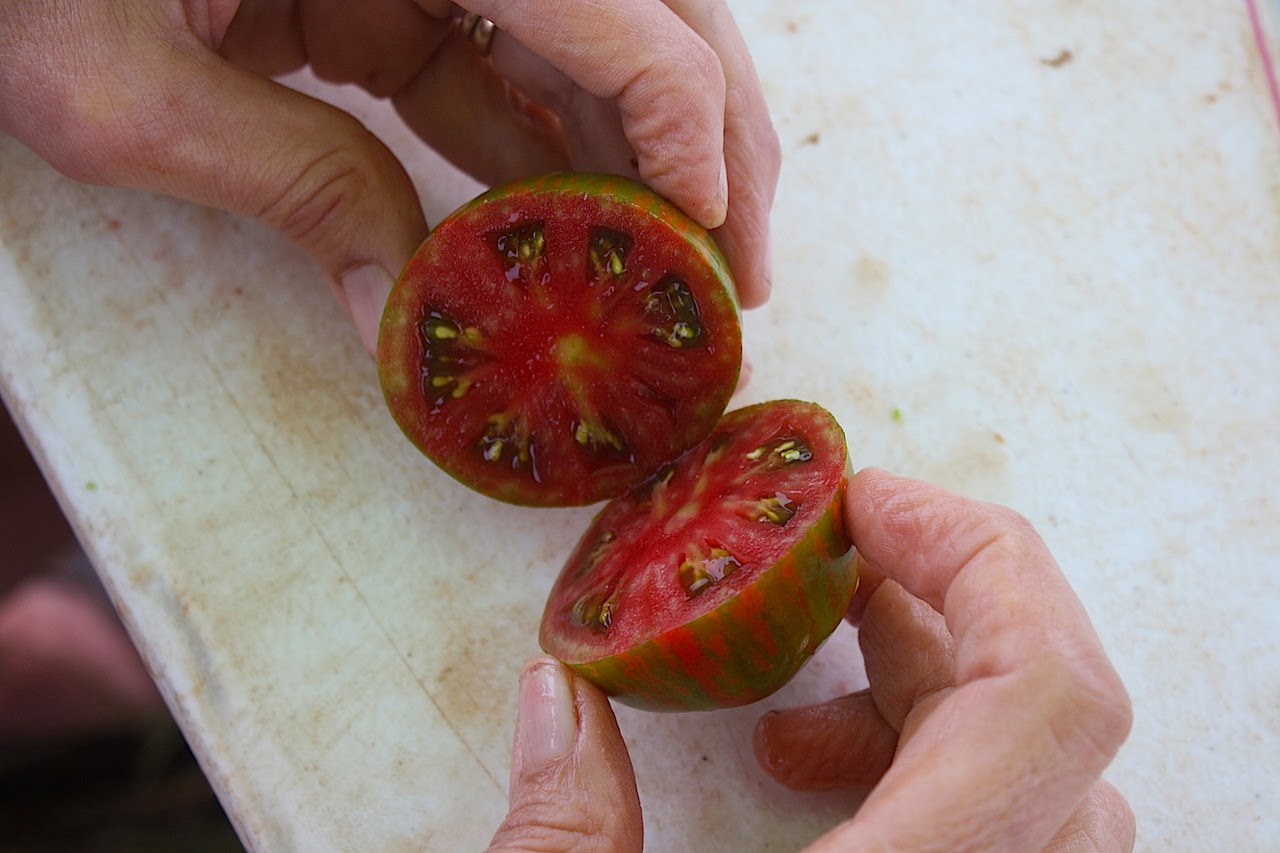 #3  Backcrossing is traditionally used to introduce a “donor trait” from a non-recurrent parent into a elite (recurrent) parent.  BCx generation represents x number of backcrosses to the recurrent parent – for example (AxB) x B = BC1.  A modified backcross means that the “recurrent” parent may vary from one generation to the next; (AxB) x C = MBC1, with A being the trait donor.  Here are fruit from three excellent F4 plants from MBC2 lines with OSU Blue as the donor parent.  Flavor in these striped indigo cherry/grapes is very good to excellent - basic trait package is fixed, fine tuning should be completed by 2016. 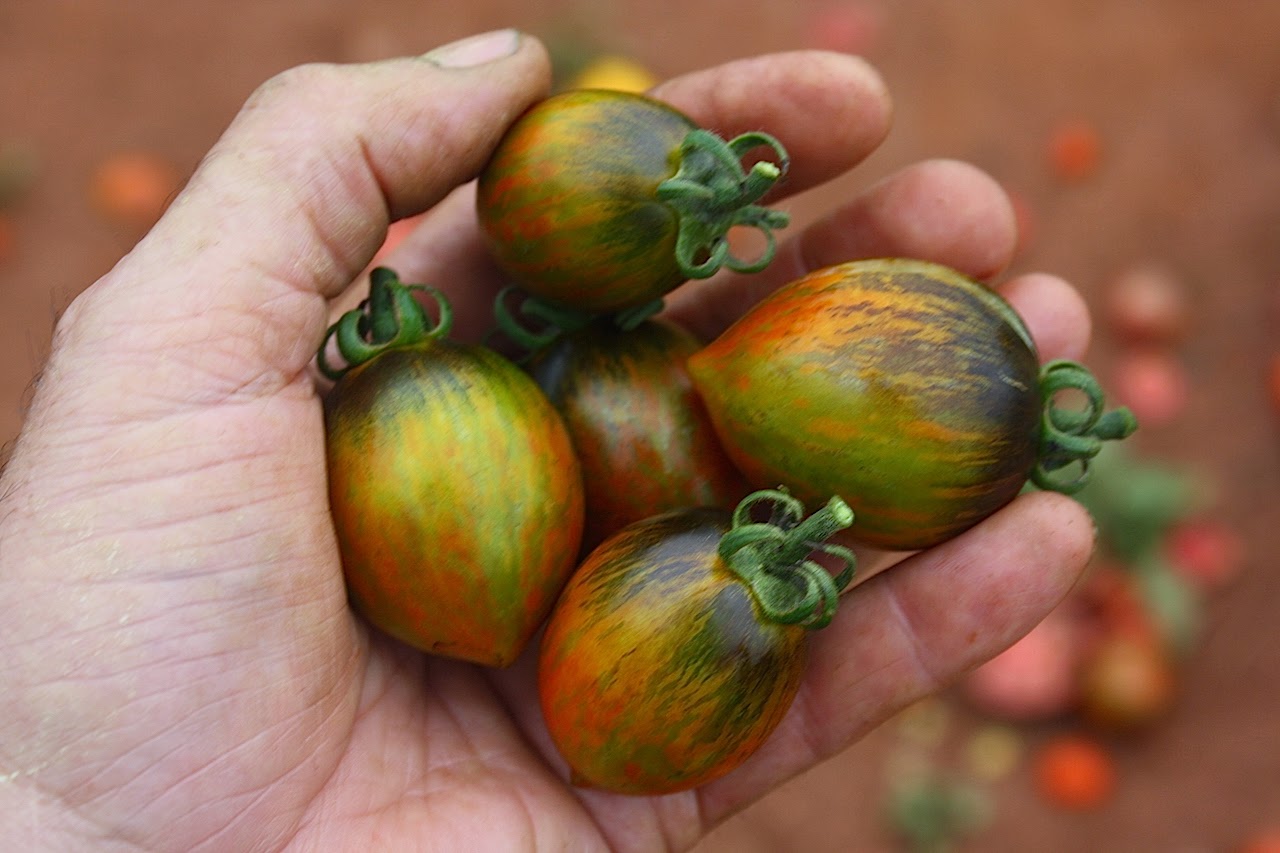 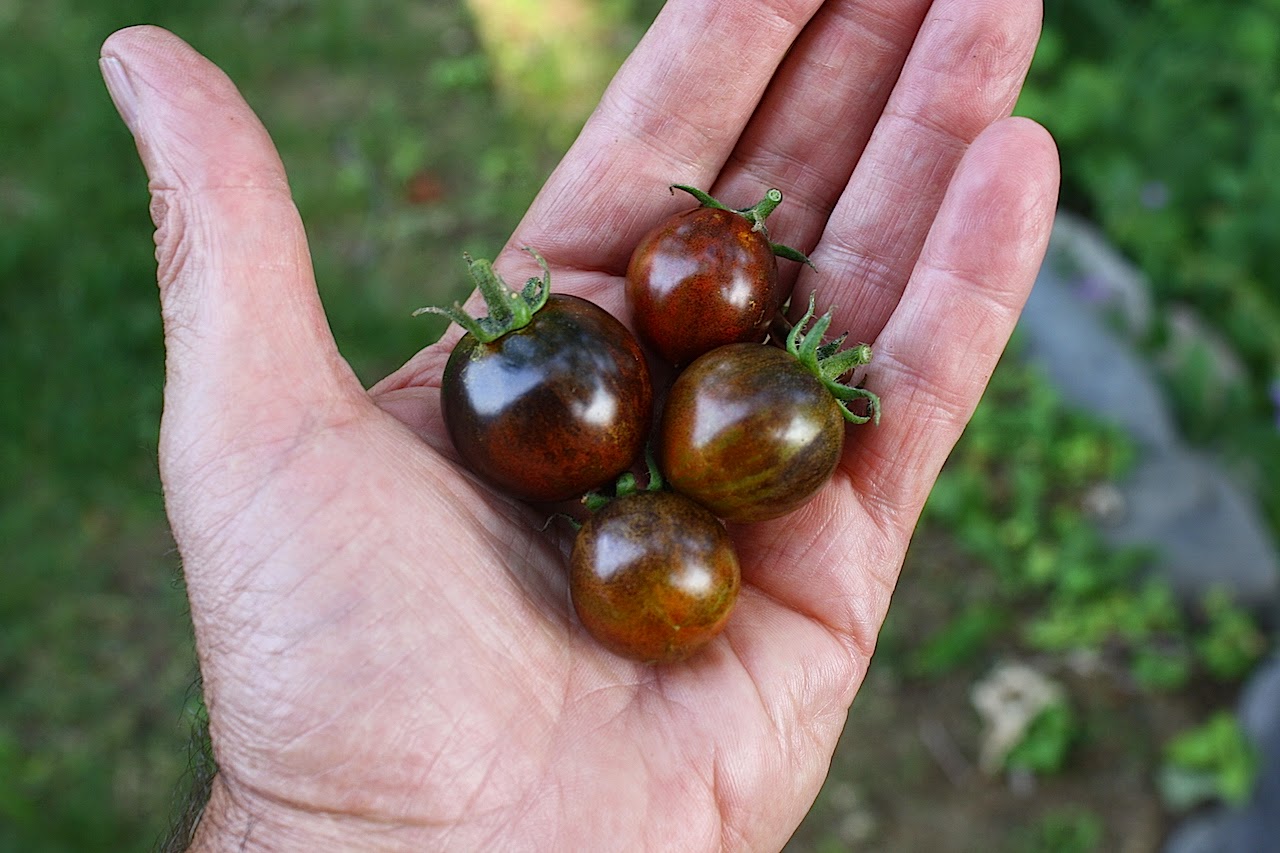 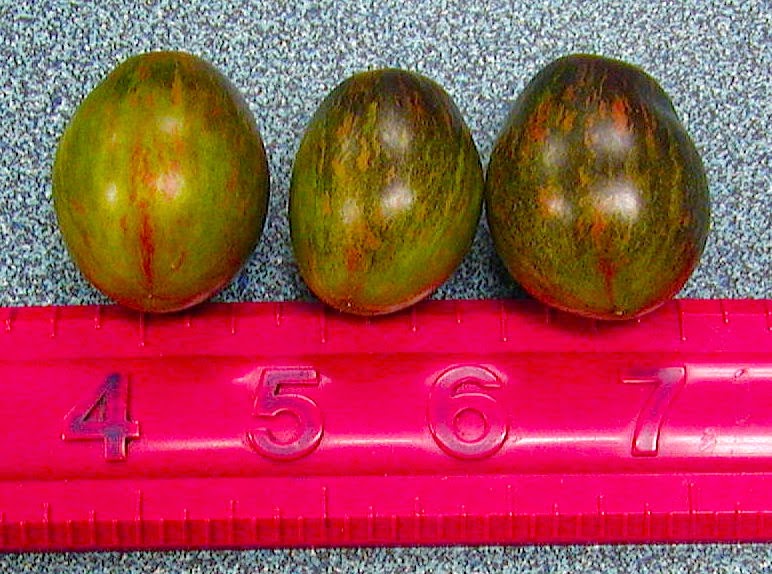 #4  This is perhaps the best beefsteak I have ever tasted.  Deep red with gold stripes, a F6 from Earl’s Faux x BTD.  Unfortunately the only photo shows cross sections of F5 plants sliced open for tasting in the NC breeding nursery.

#5  This F5 line has wow flavor and very interesting GWR tricolor flesh. Green w/ orange stripes saladette.  It placed first in two FLF tastings at our MN farm this year.  It is still segregating some for fruit size, but flavor and tricolor flesh have stabilized.  At our home nursery (MN), this is the one I headed to consistently this summer when picking a tomato or three for dinner. 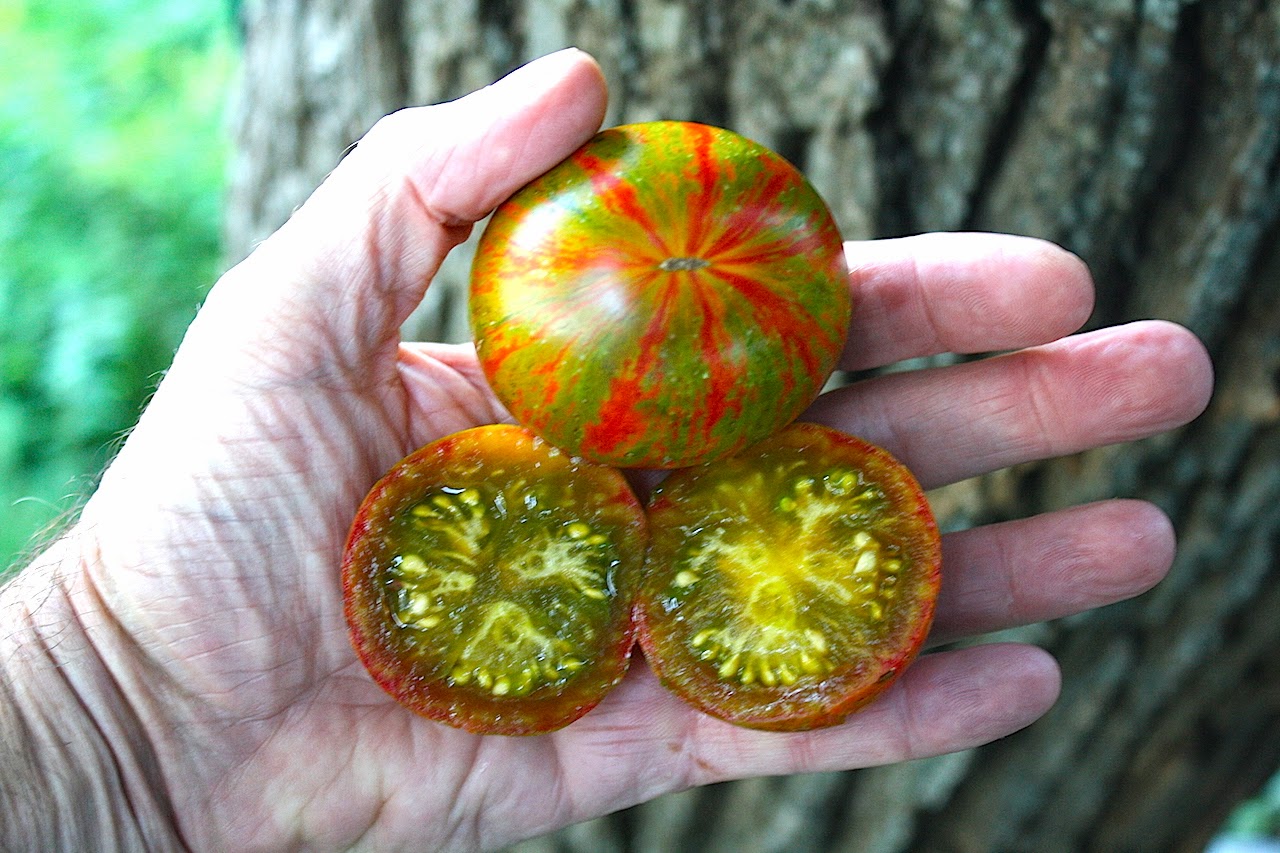 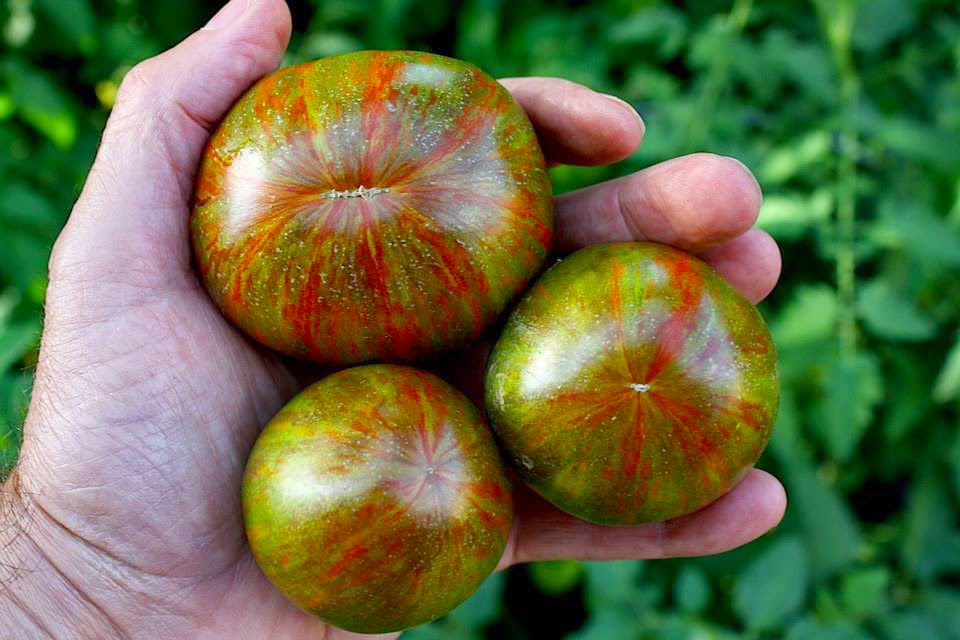 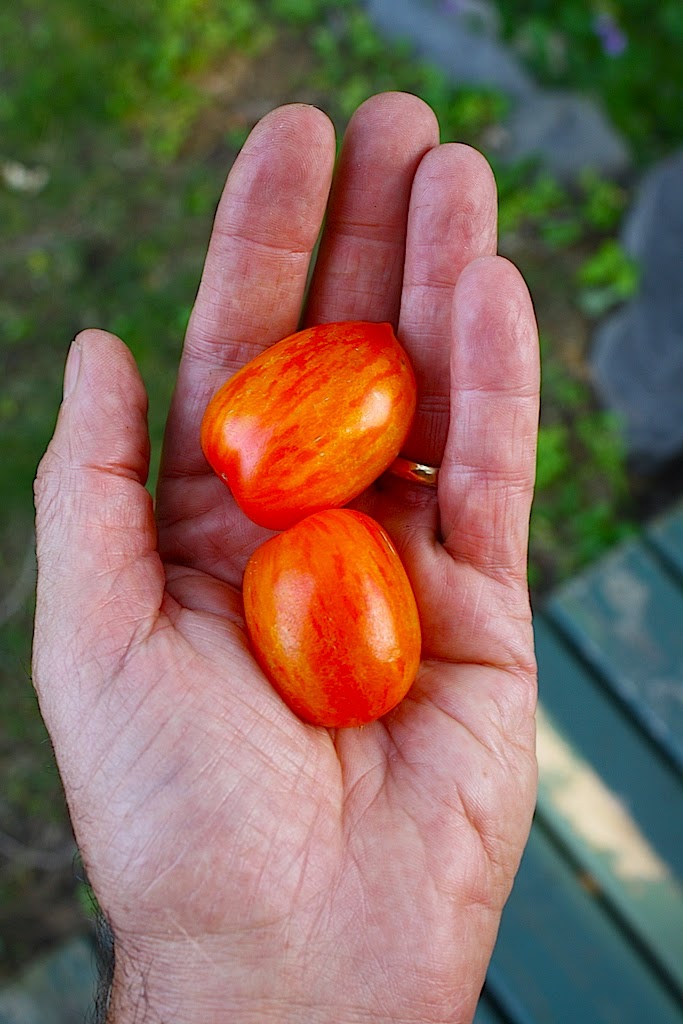 #6  We have a half dozen F6 lines from a cross between Randy Gardner’s GOB14 (LB/EB tolerant plum, similar to Plum Regal) and SunSugar.  These lines combine the flavor of SunSugar with the plant health/fruit quality of GOB14. Shape varies from grape to elongated pear - this one was a favorite.  Several of these were also at the MN nursery this year and rivaled #5 for most often eaten with/for lunch or dinner.

#7  A great line in it’s own right, this is turning out to be a phenomenal parent. This F6 line traces to (Sungold x Pink Boar), with Brix >10, and a lot of flavor complexity.  It is a poor seed producer with only moderate fruit yield - but tends to pass on most of its flavor attributes as a parent in F1 crosses.  We call it the ugly duckling – but the taste will knock your socks off. 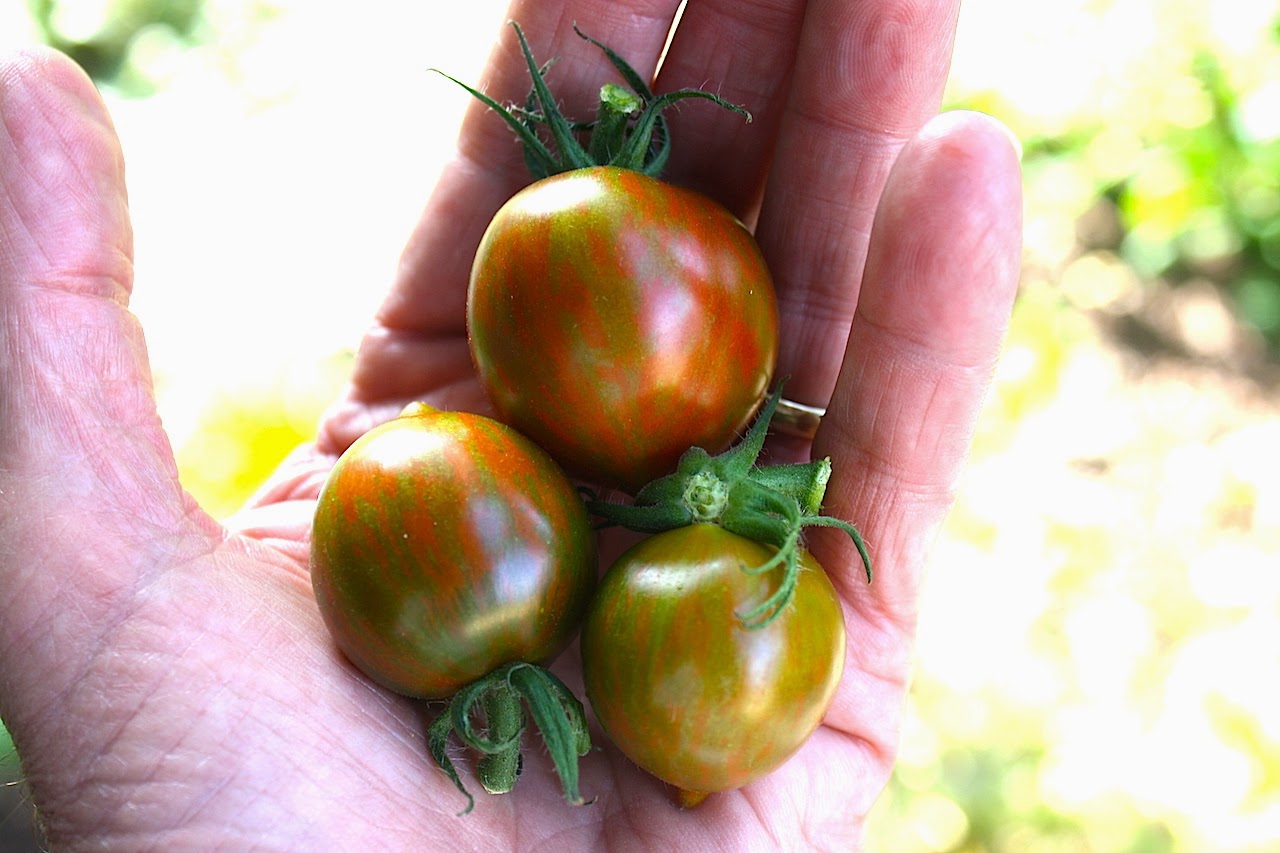 #8  This started out as a project to combine freckles and Aft/atv fruit.  The goal was gold freckles on an indigo background - and we are getting close.  Still a work in progress, but this year at our NC/Burton Farms nursery we found this single plant in a row of 50.  A friend suggested the name “Lucy in the Sky”.  This year we’ll see if the phenotype is stable. 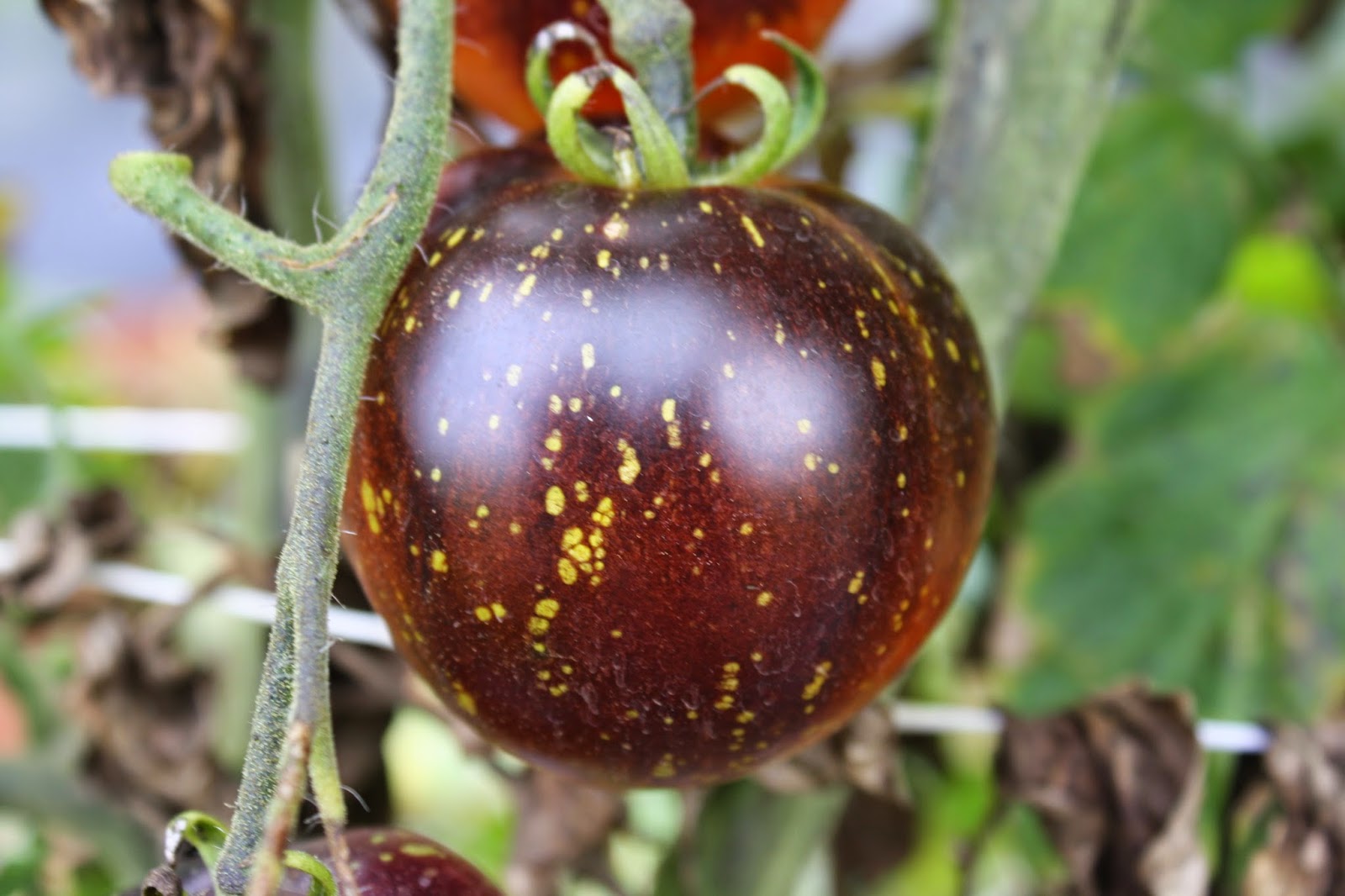 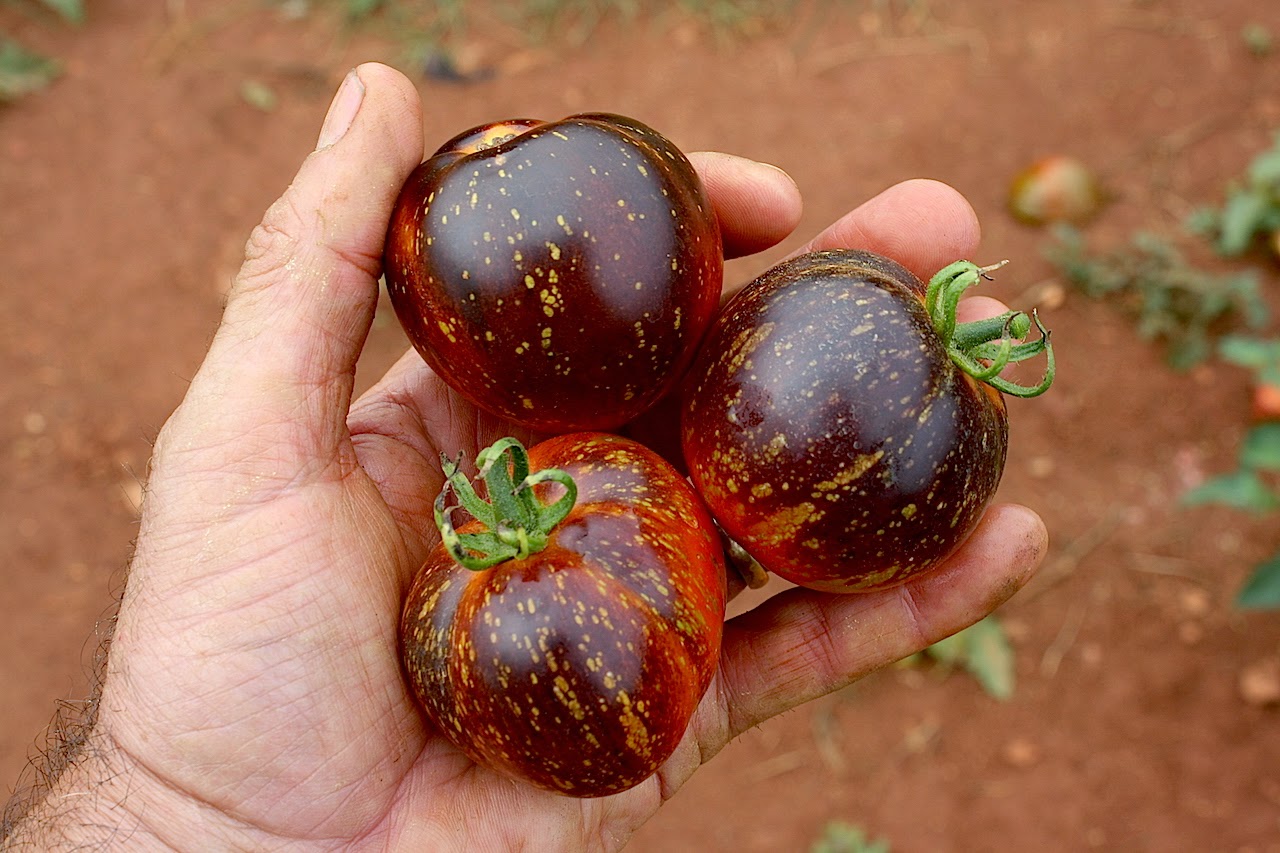 #9  Best tasting GWR in 2014, this F4 has a complex pedigree with contributions from SunGold, BTD and Cherokee Purple.  A striped oblong heart with very high yield, excellent fruit quality and very good plant health.  We have high hopes for this line, though it is still segregating. 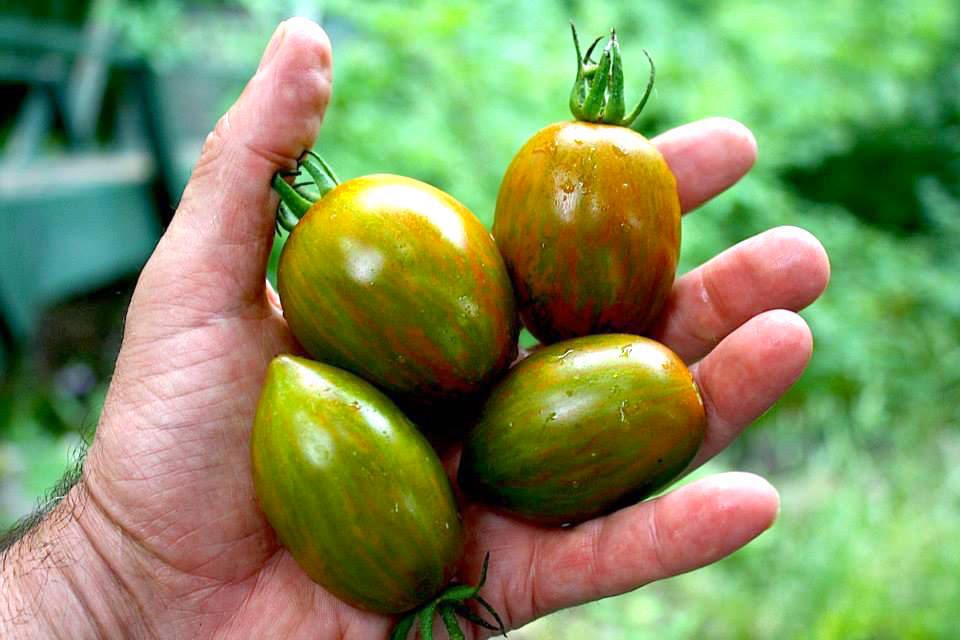 #10  We love a starburst pattern on the blossom end, and have several such lines.  This is one of the most striking, and best tasting. 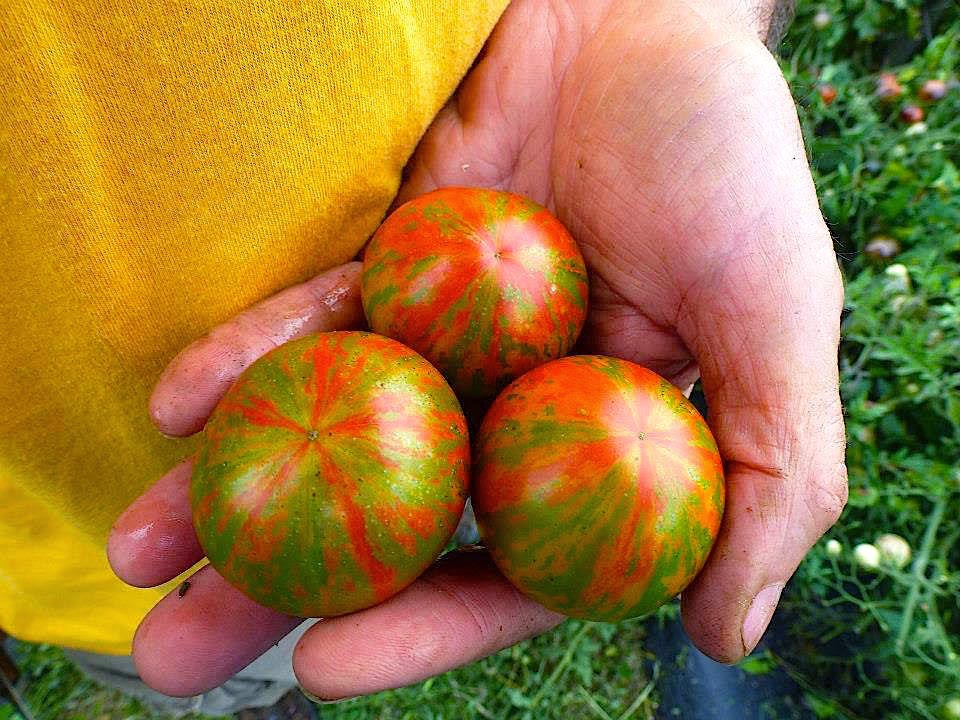 Posted by Frogsleap Farm at 3:51 PM